I had a curious question today, what security roles do you need to run a dialog?  It was one of those questions that just stopped me in my tracks, I had no idea.

One interesting thing I noticed is security roles do not need to be published, they take affect as soon as you press the save button.  This is good know but also I’m sure sometimes they weren’t always taking effect.

I assumed Dialogs were the same as workflows and some of the security was set in the scope of the workflow.  You can read about Workflow security in this great blog by Richard Knudson – Security for CRM 2011 Automatic Processes

There is no scope in Dialog’s, as you can see by the screenshot below

So the first problem I had the user couldn’t see the Dialog and this is a major problem when they want to run it.  What I mean is the user could select the correct entity – contact but when they pressed the dialog button it show now available dialogs to run.

The user could now see the dialog but when I tried to run it, in the words of the Lemonhead’s I got the great big no 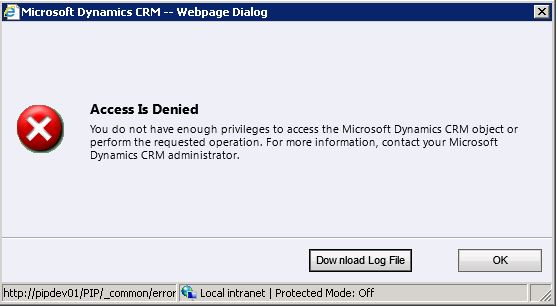 So I then added some Dialog session privileges Create, Read, Write and I was still getting the error above.

I was thinking, maybe’s it’s the append, appendTo privilege because you often need to append and appendto.  I added on those two security privileges at organisational level and it worked, hazaar.

It took some trail and error testing but I finally got there, it was the sneaky process and Append, AppendTo privileges.