If the code doesn’t work,  carefully explain the problem to your cardboard developer sitting next to you, more often than not you will realise what is wrong – Hosk

I wanted to know if my plugin had run correctly, I wasn’t sure it had run successfully.  I was looking at the records to trying to work out if the values had been modified by my plugin.  it should have changed but I still wasn’t sure.

A CRM developer – Big D suggested I check the SystemJob table and boom there it was the plugin that had run and the next plugin it had triggered.  In fact the SystemJob has a wealth of information about Async plugins, async workflows, system jobs.  You can see if they have run, if they were successful.

I had never looked at the SystemJob table before and certainly never realised that plugins created records on the SystemJob, what is this are these SystemJob.

So the SystemJob record is created for AsyncOperation, this means synchronous plugins will not create SystemJobs records.

If you don’t know the difference between Synchronous and Asynchronous plugins/custom workflows.

Asynchronous plugins/workflows will be triggered some time later when the CRM service has enough resources.  You don’t know when this will be triggered (usually it’s done quite quickly).  Async plugins do not slow the form reloading because it doesn’t have to wait.

I believe because the sync plugins fire straight away the developer can get feedback it has run but async plugins run in their own sweet time, it’s difficult to know if they have been triggered.  So Microsoft creates a SystemJob record.

Do you have to create a SystemJob record

No CRM will create the SystemJob automatically.  This means it’s a useful tool for to report if you CRM async operations are running successfully or erroring.

Plugins are of type System Event

When would you use looking at systemJob

I used it today,  I was looking at a plugin called updateBirthdayReminder, it was triggered when the birthday is updated on a contact.  It didn’t seem to be working or doing what it should be doing, so my first question was

is the plugin running?

The Delete AsyncOperation if StatusCode = Successful was ticked, so I un ticked this and updated the birthday.  I then and saw the plugin was running.

I turned on the profiler because I wanted to step through the code but because the plugin was async, it didn’t throw an error.  I looked at the systemJob and saw it had run but was waiting and in the systemJob 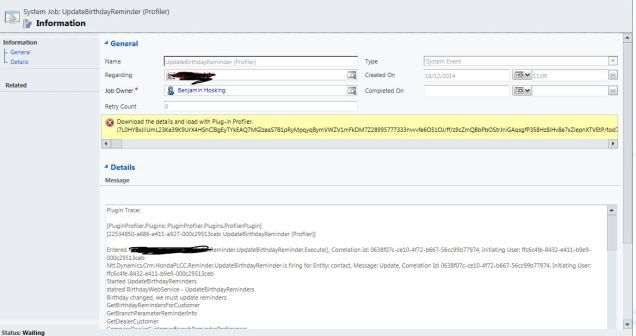 I copied the error and put it into a text file and selected it in the plugin profiler and I was then able to step through the code.

This was interesting because it means I could debug and step through the code despite the code being an async plugin.

You Don’t have to create SystemJob records

I found some information about the Delete AsyncOperation on this page

you can set it

The one downside to SystemJobs is they will keep on creating and growing your database.  To cope with this you can delete them using a bulk delete.

How to Delete Asynchronous Operation Records

Here is some more information about SystemJobs