Someone asked me to explain exactly how the Synchronisation process worked from outlook to CRM.

I wasn’t positive which records would be the last to update, I had a feeling it was the update with the latest time stamp but I wasn’t 100 percent sure.

The person didn’t like this answer at all saying you can’t just overwrite someone else’s change but this is similar to what would happen if you overwrote the change with CRM connected to the live database.

When ever I used to get calls about an Outlook Synchronisation error my heart would sink.  Usually the problem is someone is trying to update a record which has been deleted.

It was interesting because I remember studying the outlook sync process for the CRM 4 installation exam (or I think I remember because nothing like that was in the CRM 2011 exam)  or I remember reading it because I was quite impressed by the process of playback and how the Outlook offline database stores all the changes in order and then plays through them, basically replicating the offline

the blog above will point you to this document

I’m not sure why there isn’t a CRM 2011 version but I couldn’t find hardly any information on the synchronisation process and which record wins.

The key sentence is this

Out of the box, Microsoft Dynamics CRM 4.0 does not include built in conflict resolution mechanisms for offline queue playback, and as a result, the last one to playback always wins.

it comes from this paragraph.

Playback of the Offline Queue Table

When the offline client reconnects to the network and goes online, SOAP packets in the Offline Queue table are played back to the server. The application uses start and stop markers to transact certain operations in the application that perform multiple operations in the platform (for example, reopening a case, which requires copying the case line items to the new case). In case of a failure in playing back any operation between a start-stop marker, all the remaining operations are aborted and the sync queue moves to the next stop marker.

Attachments are also captured as part of the SOAP packet that is stored in the offline queue. As a result, each attachment occupies twice the space in the database when created offline. As part of the process of SOAP packet playback, prior to playback the SyncQueue component modifies the SOAP XML to inject:

If you have a new laptop and try and install the CRM 2011 outlook client then you will probably get an error when Outlook tries to use the CRM 2011 discovery service and display the different organisations you can add to outlook.

This is what happened

I downloaded the Outlook Client add on

Installed the outlook client addon and then applied rollup 10

When you open Outlook it will pop up the CRM configure Organisation screen which asks you to put in the url of your CRM server. 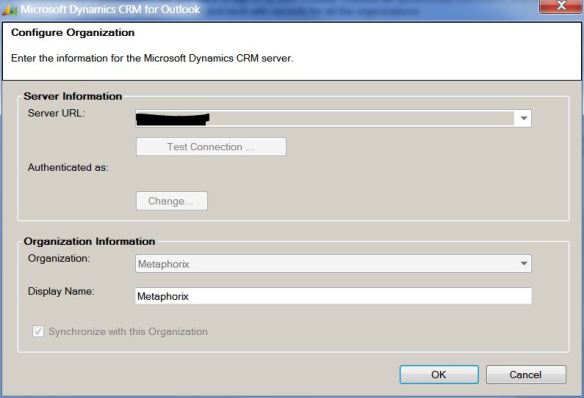 It’s at this point you get an error saying it cannot connect to the discovery service.

To resolve this problem you need to enable Windows Identity Framework 3.5 and this took me a while to find but that was only because at the moment Windows 8 is different

1.  You need to get to the control panel (here are some ways here)

2.  Go to Programs –> Turn Windows features on or off 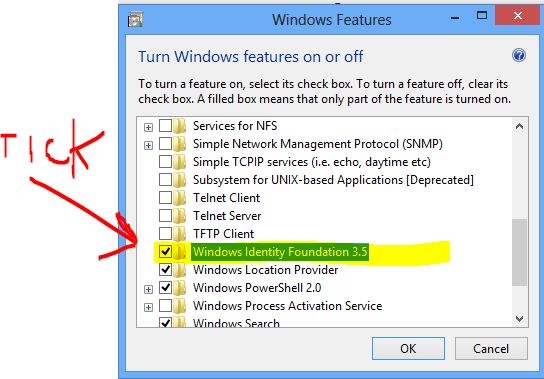 You should now be able to continue with your CRM 2011 Addon installation and go back to the CRM configuration tool, put in the url of CRM 2011 server and pick the organisation

When I saw there was another CRM rollup and it was called rollup 10 I had a sense of deja vu about the rollup, in fact I was pretty sure I had installed Rollup 10.

after a bit of digging around I have found Microsoft have released a updated version of the rollup (why not call it rollup 11!) because users have been experiencing problems.

Update Rollup 10 for on-premises CRM servers and CRM Outlook clients was released on August 16th, 2012. The estimate for Update Rollup 10 release date for CRM Online customers is on the week starting on October 8th, 2012

Update Rollup 10 contains all the hotfixes that were originally scheduled to be released with Update Rollup 9, which has since been cancelled due to the changes in the release schedule for Microsoft Dynamics CRM 2011 Q2 2012 Update functionality

on the Dynamics CRM in the Field blog.

So I think this would be a good release to install if you have any users on Windows 8 and definitely if you installed the original Rollup 10.

One of the benefits of using CRM 2011 is utilizing CRM 2011 inside the outlook client, which makes tracking emails and appointments for CRM records quick and easy.

Before you can get these benefits you need to install the CRM Outlook Add in.  I have found some great resources on the subject.

I would say installing the outlook client for CRM 2011 is quite a straightforward process, although it can be a little bit tricky if it’s on citrix or terminal services because I think you have to install it but turn off the configuring choices by default.

Here is a guide to installing outlook for CRM Online

on here it has the system requirements

Microsoft Dynamics CRM for Outlook can be installed on computers that have any combination of the following:

This first one is good because it goes through the pre requisite requirements.

I was getting the Pending email warning message today when I logged into CRM.  This message will appear if you have some emails which haven’t been sent. 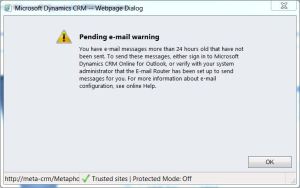 After a week of this message I finally decided to do something about it, I couldn’t figure out what emails I might have in CRM which wouldn’t have been sent.

I then remembered I was trying to set up an automatically email workflow, which sent a reply to customers when they emailed the support email address.  I had been using my email address for testing.

So where do you find these pending email messages?

I first did an advanced find for emails message with a status of open.

I then put on my thinking cap and realised these would be system jobs which have been suspended.

So I went to Settings –> System Jobs and changed the view to Suspended System Jobs.

I have no idea why Microsoft has set this mad postpone date for a date so far in the future, why doesn’t it just cancel them or perhaps try them again a day later.

You can select the message and choose resume or if you aren’t bothered about them you can cancel them.  If you are really annoyed you can even delete them but it’s better to cancel them because then you will still have some evidence of them if you delete them all traces of them are lost forever.

You will then be rid of the annoying message, unless you haven’t got email settings setup correctly and then they will soon get back into suspended state.  If that is the case you need to check the email settings for the user who is trying to send the email or the user the workflow is trying to send the email on behalf off, you can either choose to set them up using an email router or outlook.

I had a Kafka like problem today.  I clicked the manage Organisation button in outlook,

The problem then appears saying

These seemed crazy, the manage organisations button is in outlook but you can’t run it whilst outlook is open.

This had me stumped for quite a while.  I then remember that there is a diagnostic and configuration wizard installed.

The default functionality in CRM 2011 Outlook client doesn’t allow you to CRM folders to the favourites section.  This is quite annoying because the CRM folders are held way down the bottom and can take a bit of time to navigate to.

Here are the instructions

I had installed the outlook Add-In and it had been running for a month or so and then suddenly it stopped appearing in Outlook.

The folders weren’t there and non of the functionality was showing.

I tried accessing CRM using the browser and the it didn’t give me the message saying I should install CRM Add-in for outlook.

After some investigation I found out the Add-In had been disabled! I have no idea when, how or who did this.

To see if the CRM Add-In is disabled go to

This will then show you the list of Add-Ins and if they are active, inactive and disabled 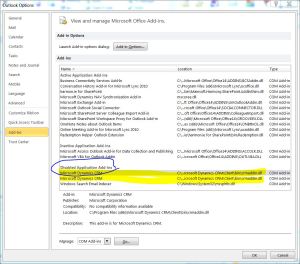 From there look at the manage section at the bottom.

Use the drop down to select Disabled Items and press the GO button, select the CRM Add-in and choose enable.

Then change the drop down to Com Add-ins and press the GO button.

you can now tick the Microsoft Dynamics CRM tickbox.

You may have to restart outlook but after that CRM should once again be working in outlook.

Recently Metaphorix has upgraded it’s CRM version from CRM 4 to CRM 2011, I should I upgraded the versions.

I found that some people who had been using older versions of outlook would find they had no Ribbon after the outlook CRM upgrade.

The reason for this was a registry setting which isn’t deleted.  To solve the problem I had to go into the registry and delete a folder called 2.4 and then it worked.

I had someone call me today saying they were working from home and when they opened outlook the CRM parts of it were greyed out.  It seemed that CRM was unavailable.

I did first check the user hadn’t had their CRM roles removed, which might explain why they couldn’t view anything, although it didn’t make sense fully because I thought CRM would still load up.

They had internet access and their VPN said they were connected.

Firstly I asked them to access CRM using internet explorer, this didn’t work.

I told them to disconnect and then connect the VPN again because it seemed to me they could access the internet but they couldn’t see the CRM server, which basically sounded like they were not connected to the company network.

After the restart of the VPN and a restart of outlook CRM was up and running again.