In recent years Microsoft has acquired many which have been a mixture of success and failure (Nokia).  When a company creates billions in profits, you need to invest the money to generate more money and fit in with your strategy.   This article will highlight key points in the acquisition and how it fits in with the current Microsoft Dynamics strategy.

What do we know

I have taken interesting facts and snippets from various and ever expanding list of articles on the subject.

Microsoft has brought LinkedIn for $26.2 billion and $196 per share in an all-cash transaction

facts from bloomberg article – Microsoft to buy LinkedIn in deal value at 26.2 billion

Microsoft acquires LinkedIn – expensive
Satya Nadella and Jeff Weiner interviews on why Microsoft Brought LinkedIn
one of the largest tech acquisitions since the the peak of the dot-com era, when AOL spent $162 billion to buy Time Warner. (The only larger one has been Dell’s $67 billion purchase of EMC, announced last year.)
This presentation has some good figures –  public presentation. 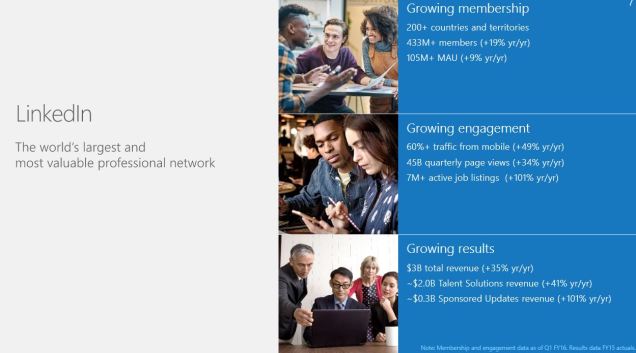 Microsoft to acquire LinkedIn
Microsoft and LinkedIn will host a joint conference call with investors on June 13, 2016, at 8:45 a.m. Pacific Time/11:45 a.m. Eastern Time to discuss this transaction.
The call will be available via webcast athttps://www.microsoft.com/en-us/Investor and will be hosted by Nadella and Weiner,
Jeff Wiener – Changing the way the world works

The Microsoft-LinkedIn deal, which is expected to close by the end of the calendar year

Sales navigator is an existing integration between Microsoft Dynamics CRM and LinkedIn created sometime around June 2015.  I will admit to not knowing this and never seen it.
I’m not sure the quality of the product but it was an important step in creating a good relationship between the two companies.  Learn more in the articles below

This article has a good overview of Microsoft acquisitions: Its biggest hits and misses, it has some interesting facts

Big acquisitions are fraught with danger and depending what made up figures you read but many articles suggest mergers fail 70 to 90 percent of the time.  When Microsoft previously made big purchases, they have not always gone well, Nokia being the standout failure (I loved my first Nokia mobile).

Microsoft and LinkedIn will need to work hard to make this a success.

What does it mean for Salesforce

The sales connector mentioned above integrates with Microsoft and Salesforce, I was expecting lots of applications to integrate with LinkedIn.  The article below explains the small number of integrations

It seems LinkedIn is selective about what companies can integrate with LinkedIn, the value of LinkedIn is the people it has in it’s database who are using it’s website.

The lack of companies which integrate with LinkedIn shows a sense of direction and a clear strategy.   Satya has played nicely with Salesforce last year creating a partnership, which is discussed below

Will Satya share LinkedIn with Salesforce or will he turn the screw and allow Microsoft Dynamics to create a competitive advantage by only integrating with Microsoft.

Why did Microsoft buy LinkedIn

They share elements of a common goal of helping people and organisation work productively by working together, Microsoft uses technology to help connect people, LinkedIn uses it’s website.  The key element is people and LinkedIn have 433 million people who Microsoft can try and tap into.

Buying LinkedIn fits into Microsoft’s cloud strategy which is an area Microsoft needs to keep pushing into if it’s going to convert itself to a cloud solution company from a desktop solution company.

These quotes from here highlight the potential of the deal

It helps us differentiate ourCRM product with social selling. It helps us take Dynamics [Microsoft’s suite of business management software] into new spaces like human capital management with recruiting, and learning, and talent management.”

He also said that the deal would help Microsoft target “sales professionals, talent people, and recruiting folks, as well as marketeers who are looking for B2B marketing targeting.”

This quote gives a strong indication where the future lies for the LinkedIn/Microsoft, it’s taken from Satya’s LinkedIn Memo

It requires a vibrant network that brings together a professional’s information in LinkedIn’s public network with the information in Office 365 and Dynamics. This combination will make it possible for new experiences such as a LinkedIn newsfeed that serves up articles based on the project you are working on and Office suggesting an expert to connect with via LinkedIn to help with a task you’re trying to complete. As these experiences get more intelligent and delightful, the LinkedIn and Office 365 engagement will grow. And in turn, new opportunities will be created for monetization through individual and organization subscriptions and targeted advertising.

It sounds good in theory, we need to see how it will work in practice, we wouldn’t want a LinkedIn version of the paperclip!

Will it be successful?

Now LinkedIn is owned by Microsoft, it can pursue a long-term strategy, focusing on integrating with Microsoft and not waste time, effort and money on short term strategies.  Microsoft can if they choose speed up LinkedIn’s development and growth

Integrating LinkedIn with Microsoft office products/Office 365 and Microsoft Dynamics products can add value to the LinkedIn and give Microsoft a unique differentiator..

One area LinkedIn is lacking is the integration of it’s data with companies, this could happen with integration with Office 365 and Microsoft Office products.

The value of LinkedIn isn’t the technology but the people registered on LinkedIn, these are of great value to Microsoft.  Microsoft has overpaid in today‘s market but this might turn out to be a great investment in 5 to 10 years time.

Without Microsoft LinkedIn has a great business model, LinkedIn haven’t monitized their platform much, improvements in this area will bring larger profits.  Being owned by Microsoft should help and could prove profitable for both Microsoft and LinkedIn.

Letting LinkedIn be its own company is a great move because it was doing a good job in a different way to Microsoft, so instead of disrupting it, let it continue.

Whats the buzz in the CRM community

Microsoft have overpaid but when there is cash in the bank and slowing growth you feel you should act.  The 433 million users will be a massive benefit to Microsoft and buying LinkedIn they purchased the leading working network site.

Most professionals use LinkedIn and Microsoft Office products, integrating them will save time and add value to those people who use them.

inkedIn integration to the Microsoft Dynamics products will give Microsoft a competitive advantage Salesforce and other CRM products won’t be able to match.

The price Microsoft has paid is a testament to the progress LinkedIn has made because of LinkedIn size, it would be difficult for Microsoft to compete by creating it’s own platform, Microsoft needed LinkedIn more than LinkedIn needed Microsoft.

Buying LinkedIn fits in with Microsoft’s cloud strategy and helps them to continue to grow in this market.  LinkedIn will become a profitable company on its own but working with Microsoft both companies can benefit.

The main criticism with the acquisition is the price, Microsoft have overpaid big time but this is only a consideration in the short term and it was money Microsoft had in cash!  I will end with the same Warren Buffet quote