I got an email from Experis discussing Microsoft Dynamics market survey they ran recently.  Unfortunately I can’t seem to a link to the actual report but it was interesting and the results are good news for people working with Microsoft Dynamics CRM.

They have concluded from

I feel I should add the last part in, which is a link to their website

If you are looking to take advantage of the new job opportunities in 2014, visit our website for the latest openings.  Also they have a salary checker for people in the UK – http://experisit.salarytrack.co.uk//

Their findings are interesting, wages were static last year but now with the release of CRM 2013 there will be a requirement for customers to update to the latest version and this it seems puts a squeeze on the CRM resources and pushes the price up.

It also shows you the importance of keeping your skills up to date because not only will CRM 2013 skills be in demand but there will be less people with these skills.

Point 3 about personal training does sound in general like the people I have worked with whilst using Microsoft Dynamics CRM projects.  A lot of the people read/write blogs and have studied for the CRM certifications in their own time.  When new releases of CRM are released they make sure they learn about it.  At the moment CRM is quite fast paced with Microsoft making dramatic changes on a yearly basis, so if you didn’t keep up you would soon be left behind.

In general they seem a lot more self motivated and driven individuals, which is exactly the type of people you want to be working with I think. 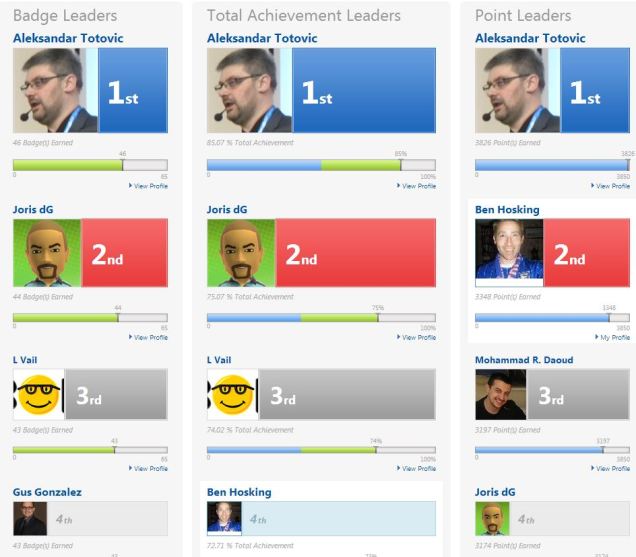 I am also 10th on the badge leaders, a precarious position and could be over taken at any moment.

I have one more badge to get and that’s Problem Solver 5 a badge which only 22 other Dynamic Community members have.

My target after that is to try and get a Microsoft CRM Community Contributor Badge , This is a special badge awarded every six months to the top 5 members with the most verified answers in the Microsoft Dynamics CRM forum, providing notable contributions to the community.

I am currently in the top 5 contributors, now all I have to do is stay in that position until June!  Yes you don’t get this badge easily.

I have heard that Microsoft are looking at developing the leader board some in the coming months.  This will potentially have a monthly leader board and the ability to view all the members positions.

Along with the new badges and lots of other improvements in the Dynamic Community there is also a leader board. The leaderboard shows a list of the 3 different top tens and this list includes all dynamic flavours AX, CRM, NAV and GP.

Below is the link to the standard Leader board

In some ways the leader board is a bit redundant because it’s mainly just a list of Dynamic MVP’s and really this list isn’t going to change very much because most of these people have got practically all the badges/points, so it will be very difficult for a non MVP to get onto the leader board.

but I also found a link which gives you lots more details about how many questions people had answered, how many verified questions and other interesting facts and figures.  Click below to see

This link is a lot more interesting because you can view more statistics and even find yourself by clicking the highest badge you have.

if you have ever wondered how much effort the MVP’s put in to get their MVP status then you should look at the badges leader board section.

The number of questions they have answered (or attempted to) is incredible, I knew they worked hard and contributed a lot to the CRM community but the amount of effort they have put in certainly deserves respect and shows you the levels you need to reach if you want to be a CRM MVP.  I was only looking at the highest badges but you can you view other badges to find yourself (assuming you haven’t got the highest badges)

The first pictures show those people who have got the level 4 badge and the numbers are total questions answered.  So you get a count for every time you answer a forum post (but doesn’t have to be proposing an answer). I feature on this one with a small 300 which is way behind Jason Lattimer and Gus Gonzalez

Problem Solver 5 shows how many verified answers the users have, Jason Lattimer has an amazing 394!

I started a trial of CRM 2013 and I have to admit I really liked the lack of popups, it seemed to make it a lot more smoother and easy to keep track of what your were doing without having to peek at the 10 internet browsers.  I actually did this a while ago but didn’t get round to publishing this blog post but it was still my first impression

I automatically opened the CRM instance in IE but then thought I would try it in Chrome, woah, it works and feels just the same as IE.  I would also say CRM 2013 looks lovely

I’m not saying this is negative, it’s just different and there is no reason to fear change.  I logically worked out if I clicked on the account, it should be a hyperlink and take me back to the account, pow, back I was.   This time I added the contact, search and then add, this displays (I was going to use the word popup but that is just plain wrong, nothing popped up, it was more of a bar) a bar of information for you to add the new contact.

It was smooth and slick but the one thought that kept popping up in my mind was, how the heck do you develop these things yourself?  This is going to be very different from CRM 2011

The social pane is an interesting feature, it’s something which Microsoft have added and is both useful and frustrating.  It’s quick and easy to use and has functionality in you couldn’t add using the standard GUI.  It has three tabs, posts, notes and activities.

I have also answered lots of forum questions with frustrated users who have found they cannot modify the social pane and the functionality within it for notes and calls is not what they want.  Hopefully Microsoft will make this customizable in future rollups.

Business process flows are an unusual concept.  There is a form that sits on top of the form which is used to encourage people to fill in the data for the record.  The fields are also on the main form but they sit up the top prompting users to fill them in.  It’s quite a good idea but I did now and again find it annoying without any idea of how to get rid of it.

Overall I enjoyed using CRM 2013 and although initially it was slow finding my way around, I really liked the fact you didn’t have lots of windows popping up everywhere.

There are also some good new features in CRM 2013 which I have had a little look at.  I have tried a business rule and realised I needed to create two business rules, one to do something and another do undo.

It feels to me like CRM has moved forward in the import area of looks, this matters to customers, especially when attracting new ones to projects.

There isn’t much to add, so I will just give you the links

Microsoft also recently posted a refreshed SDK for CRM 2011 at UR15 level: http://www.microsoft.com/en-us/download/details.aspx?id=24004

The main problem with unsupported changes in Microsoft Dynamics CRM, is there is no guarantee they will work in the future because it may use/reference some functionality that Microsoft will change in the future or possible remove

finally when it comes to upgrading the solution, the unsupported changes may not work and could cause difficulties when upgrading.  This probably seems a long way off when you are putting the change in but upgrading versions of CRM will involve a lot of checking anyway, you don’t want to make more work for yourself later.

I got this error today. whilst trying to deploy my updated CRM 2011 plugin

This is one of those frustrating errors because to my knowledge nothing had really changed.  This forum post was very useful and set me off in the right direction.

Now I have had this problem before and will no doubt have this problem again in the future.  The reason for the problem in this case was because RegisterFile.crmregister file was read only.  When you click deploy visual studio will try and write to this file and was failing because it couldn’t write to it.

So to resolve the problem you need to check out or make editible the RegisterFile.crmregister file.  Deploy again and it will hopefully work without any problems