I had to import some contacts into an organisation, I created my import file which involved a bit of excel manipulation and concatenating some columns together.

When I imported the file, the customer then decided (well I asked them actually) the concatenated column should use different fields.  To fix this I had two options.

I chose the second option because it involved only importing and not exporting/importing and I wanted to write a blog about it.

Then tick the import file with the records you want to remove.

Go to the large Delete button in the top right corner

All Records Imported to This Entity During This Import

Finally Microsoft has made a CRM 2011 user guide.  I found it quite baffling they never had a user guide for people to download, it seems weird to expect people to buy a complex system like Microsoft Dynamics CRM 2011 and then not tell them how to use it fully.

I appreciate there is a good resource centre which has lots of great articles but it doesn’t have an order to it, people can’t work through it and it would make it very difficult for people to print it out and some people like to do this.

What this is does enable me to do is give Users a guide and tell them to use the resource centre before users have purchased a book.

I would still recommend users to initially use the Resource Centre because it has some excellent examples and it shows the data in different formats.  The resource centre has links to videos and has some really good diagrams which make understanding process flows of CRM much easier than reading about them.  The user manual although useful doesn’t have any diagrams or screen shots which can make using it feel a bit of slog but it’s free so don’t think I am complaining.

An example is the article of following a quote from creation to conclusion, which you can read in full here but the diagram below explains it brilliantly.   To describe the process below would take many words and wouldn’t be as easy to understand, I can vouch for this because I have tried to explain the process to people and it’s pretty difficult and you will soon find yourself up at the white board drawing a diagram similar to the one below.

I was doing an installation of CRM 2011 today and I had to connect to a citrix network (is network the right word?)

So I downloaded the new Citrix Receiver Entreprise edition, yes a brand new version just to add to the potential pitfalls.

I haven’t used a citrix connector but the receiver seems to be their version of a VPN connection.

Once I had l put in my details and logged on, suddenly citrix installed a bunch of applications on my machine

Not ideal really as I’m not sure I want the 2007 office suite clogging up my programs.

Interestingly it creates its own remote desktop and this was where the fun began.

When I clicked the remote desktop, it instantly tried to load up a remote desktop to a server but I had no idea which server because I didn’t get the chance to choose.  Then to make matters worse it wouldn’t let me connect to the mystery server anyway.

A lot of head scratching ensued, I tried adding domain \ to the login, nope, I tried reinstalling Citrix receiver and still nothing was working.

So there you go if you are having problems with Citrix and remote desktops make sure you have added the domain to your initial Citrix connection.

it’s often useful to know what version an organisation is on and unfortunately when you look at the version/build[tweetmeme source=”BenHosk” only_single=false] numbers they all look so similar you then have to Google the numbers.

For some reason it’s at this point I always find it difficult to find a list of the versions and build numbers to clarify what build they are on.

I have done a few CRM 2011 installations and although the first part of the installation actually starts with making sure the servers are 64 bit and have enough power, the next stage is begging the IT person to give you domain administration privileges so CRM can create some active directory groups.

You have another small leap which is to log onto the clients servers and spend a few times trying to type in the tricky passwords.

You are now ready to set-up the prerequisites of SQL server 2008 installation (probably configuring reports server as well) and adding the pre requisites for the CRM server and making sure IIS is turned on and various other bits and bobs.

These is a critical part of the install, things not turned on and installed now can cause you hours of head scratching.

I have over the past couple of weeks found some good resources of information for the connector and finding useful information is difficult because there isn’t much of it and a lot of the blogs/sites you will visit will be the same information and all they will tell you is what the connector does and the default entities which are mapped.

Hopefully more people can start blogging about the connector and creating more quality material for it to ease the frustrations you will find when using it.  One of the problems is what to call the connector, it seems to be references by loads of different names.

So rather than just complaining about it I am going to do my bit my sharing some of the useful links and hopefully write some blogs on the subject.

Excellent blog with many posts and a good installation guide

I got emailed this free productivity boost from LinkedIn, which offers you a free months trial using the premium package

LinkedIn Premium helps you to be more productive, with tools such as:

Get these benefits and many more including the ability to view up to 700 profiles per search.

I think the InMail benefit and Expanded Profile View seem to be go against the philosophy of LinkedIn.  You are only able to see the profiles of people you have linked with and you should only be able to contact those people who you have linked with.

Let us not forget the warning messages about only accept LinkedIn requests from people who you know and then they give you a link to page telling you why this is important.  Well that is the LinkedIn philosophy unless you pay them some money in each month and then you can do what you like.

I believe some of the privileges above are why LinkedIn seems to be full of recruitment consultants harassing anyone and everyone.  I also wonder if anything actually happens when you report things as spam.

The loosening of its standards and rules is slowly but surely have a detrimental effect on LinkedIn with most of the noise on LinkedIn coming from marketers and recruitment consultant.   I would add LinkedIn does very well with the technology groups and I have read many interesting posts and articles on LinkedIn.  My main point is the interesting posts are out numbered by the mundane.

I wonder if LinkedIn is too big and entrenched like Facebook, you would have to say that it has become the standard tools in many companies and individuals social media strategies but many vast empires have fallen in the past.  Also if LinkedIn keeps going down the same path they might contribute to their own downfall.

I recently had a customer call up saying their workflows in CRM 4 were not sending emails.  This involved me doing a bit of research about emails in CRM.

The fundamental piece of information is CRM doesn’t have any email capability!  Yes it needs something else to send the emails for it.

There are two popular ways to send email in CRM

Another piece of important information to realise is the emails settings above are configured for each user individually.  So if you go to a users settings you will find a setting called

You have an ingoing and outgoing setting.

The user either has to have the CRM outlook addon installed into outlook or they need to specify the CRM Router (which you will have had to set up). One caveat of the CRM Router is it isn’t really linked to CRM so if you specify a user email settings to use the CRM router you will then have to go to the CRM Router and refresh the user 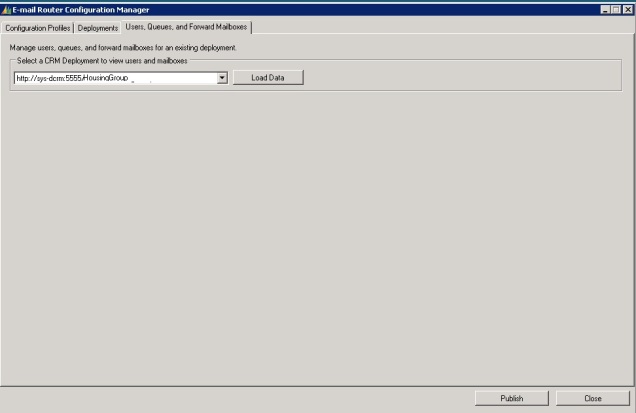 The other thing to consider if the user is using outlook is it will only send the emails if outlook is open (I think this is correct) so if the user shuts down their machine then no emails are going to be sent.

This problem turned out to be the person who created the workflow didn’t have their outlook setup to send emails on their behalf.  I have seen this problem before and what some people do is use one account to create the workflows and for that user to have the correct email settings.

I had a problem today with a similar solution, so my advice is when there is a problem sending emails go into the Administration/user/ and check the outlook settings or you can go to these if you go into the CRM options in outlook.  You should check to see if the checkbox for sending emails on behalf of the user is ticked.

I have been working with the connector for the last couple of weeks, I am flabbergasted by the total lack of information about it.

Microsoft haven’t even created a sample CRM link.  The only example you have is a GP sample.

What’s more frustrating is the complete lack of documentation and examples.  They cover the out of the box sample ok but then anything after that is left to the user to stumble around blindly.

Then you start to Google for help and soon find that hardly anyone has seemingly used the software before apart from 2 people.  You will also find the official NAV connector blog which basically has marketing material on it.

It seems like a shame because if Microsoft put some effort it and created some better documentation and samples then people could get it working and that would increase the chance of partners selling NAV and CRM.

Most developers I have asked about it have said don’t touch it with a barge pole or use Scribe.  I find this disappointing because to resolve these problems Microsoft just need to divert a small amount of resources to help people get started with the connector.  I have also found I am dealing with bewildered customers who can’t believe there isn’t a way for two Microsoft products to integrate easily.

Error while Importing a solution in CRM 2011 – The solution file is invalid. The compressed file must contain the following files at its root: solution.xml, customizations.xml, and [Content_Types].xml

after about an hour of frustration the solution to the not importing solution finally struck me.

The problem was I was zipping up the solution folder, this then creates a zip file with a folder at the root and then the three solution files

What you have to do is select the three xml files and then zip them up.  This then doesn’t create the root folder.

This is definitely a “Monday Morning” error and it’s a pity CRM doesn’t have an root folder error which I’m guessing would save a lot of people a frustrating hour or so.